Update your wardrobe with this staple men’s Champion long sleeve shirt. The soft cotton fabric and relaxed fit allow to wear the shirt on its own, or layer it with your favorite jacket. Plus, it has the added bonus of a Champion “C” logo on the left sleeve. 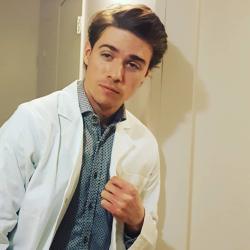 Inventor at Science Bros.
Founder and President of Science Bros., after High School Danny became an automotive mechanic and saw fast that he could do more. After two years, he returned to school in electrical engineering technical program. While he was doing that, he realized that he wanted to be an engineer. So right now he is studying automation engineering in Montreal, Quebec, Canada. Since he's young, Danny is passionate about arts, science and robotics. He believes that those three things can easily be combined to create fantastic inventions. Right now, he's working with his friends on Bionics application to try to make the world a better place for everyone.

There are no reviews yet.